Atrium Health wants to use its wayfinding tool to improve both the patient and the visitor experience.

As visitors to any hospital can attest, navigation is no easy feat. Finding the right room, let alone the right department, is stressful — even more so when the health of a friend or loved one looms large.

That’s especially true for facilities like Atrium Health’s Carolinas Medical Center, which, since opening its doors in 1940, has grown from one building into a sprawling, 2.8 million-square-foot campus comprising multiple buildings. Last year, the organization made wayfinding a priority with the launch of Atrium Health Directions, a mobile application that helps users navigate the Charlotte, N.C., campus. The app started by including maps of Carolinas Medical Center and Levine Children’s Hospital (800,000 square feet), and the organization plans to add another 735,000 square feet in early 2019.

“Everybody in healthcare is still trying to figure out wayfinding,” says Pamela Landis, vice president of information and analytics services at Atrium Health. “We wanted to use technology to improve the patient and visitor experience, and do it in a way that is not overly expensive but still incredibly valuable.”

Once patients and visitors open the downloaded app, it asks where they want to go, using Bluetooth technology to “breadcrumb” them through the campus via beacons, says Landis. Users select their destination, and the app then displays their location as a blue dot on their smartphone to enable real-time navigation and directions.

“It looks like a Google map or any GPS mapping tool,” she says. “What I like about the app experience is that it is very simple and easy to use for the patient or visitor.” Today, mobility plays a key role in helping healthcare organizations optimize navigation for patients and visitors.

GET STARTED: Register for the HealthTech Insider program today.

Jump-start Wayfinding by Determining a Use Case

Julie Krohner, chief innovation officer of Philadelphia-based consulting firm Exit Design, helps health systems determine if mobile wayfinding makes sense for their organization, and if so, whether to integrate it with other functions.

For example, a complex campus with many interconnected buildings and other high-tech offerings could integrate mobile wayfinding with an app that conducts other valuable tasks for a patient or visitor, such as logging in to medical records, finding hospital amenities and saving a parking spot, Krohner says.

“There must be a compelling routine use or value for people to view it as an asset,” she says. 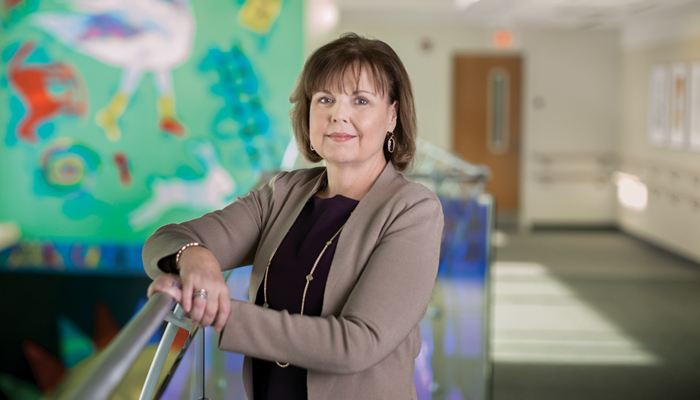 Atrium Health wants to use its wayfinding tool to improve both the patient and the visitor experience, says Vice President of Information and Analytics Services Pamela Landis. Photo: Charles Harris.

In developing Atrium Health’s app for both iOS and Android devices, Landis and her team used Aruba Meridian AppMaker, which allows the organization to control app branding and deployment.

One of the first decisions Landis made was to keep Atrium Health Directions separate from its MyAtriumHealth consumer app. Interior map users often don’t need all the features that MyAtriumHealth offers, such as access to Find a Doctor or the patient portal, she says. Creating a unique app was also a quicker process and less expensive; the project began last February and went live in July.

“We rolled it out faster than we would have if we built it into our existing mobile app,” Landis says. “It was really efficient.”

Although the project came together quickly, there were several key steps involved. Led by IT, the team also included marketing personnel and the facilities management group, which has all the up-to-date maps of the facility.

“When you put those maps into the app, they look like architectural renderings,” Landis says. “Working with our facilities and marketing teams, we made the labels and map renderings more consumer friendly.”

Before the app building began, serious legwork was required to hang approximately 3,000 beacons across the campus. “We conducted multiple walkthroughs to make sure we had everything right,” Landis says. “Even if you think you have beacons in the right places, you have to double- and triple-check. We literally walked miles and miles of the campus to make sure we didn’t have any dead zones.”

Like Atrium Health, Saint Luke’s Hospital of Kansas City in Missouri turned to Aruba Meridian to build its wayfinding app in 2017. The app complements kiosks and interactive displays throughout the complex, but also can consolidate and launch multiple apps, including virtual visits and access to the patient portal. 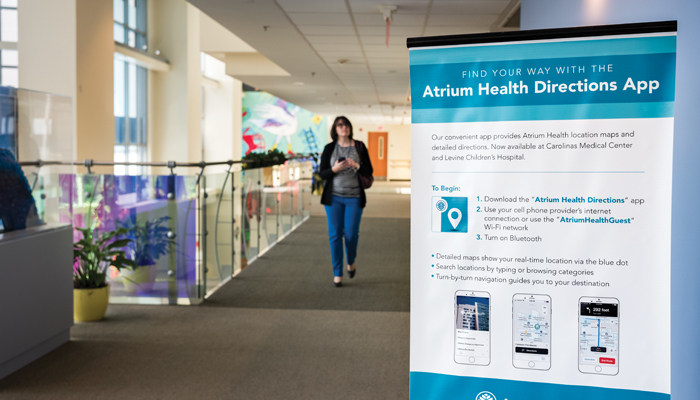 Atrium Health’s IT staff worked with its facilities and marketing teams to ensure map renderings on the app would be consumer friendly. Photo: Charles Harris.

“We’ve made a pretty aggressive push toward using digital technology to improve the patient experience, and wayfinding was identified early on as an area of focus,” Saint Luke’s Chief Digital Officer Deborah Gash says.

Prior to deployment, network engineers worked with Aruba to study how the new system interacted with the hospital’s Cisco network. They validated the coverage and conducted a walkthrough to make sure the blue-dot navigation experience was accurate, and monitored any changes to network traffic.

For security purposes, Saint Luke’s chose not to display the entire walled infrastructure of the campus when creating map views of the hospital. “We decided to minimize the map display only to corridors in the public buildings where we want people to navigate,” Gash says.

What I like about the app experience is that it is very simple and easy to use for the patient or visitor.”

A dashboard shows the status of the beacons so staff members know when a battery is running low. What’s more, for additional user convenience, Saint Luke’s also features a geofencing capability that automatically starts the app’s wayfinding solution once an individual enters a virtual perimeter within the organization. “That’s a more proactive way of telling users that we have this capability and then taking them right to the wayfinding product,” Gash says.

Testing is a crucial part of any deployment. Atrium Health turned to its patient and family advisory group as initial testers for its app. From that group, the organization received insights about why it needed to wire the rest of the campus.

Listening to patients and their families, the project team learned how people receive their care on campus. Some patients, for instance, might have three appointments in different buildings on the same day. Getting from building to building was just as important as navigating once they were inside, Landis says.

“That was the driver for us to expand to the rest of the campus — learning from those early users,” she says. Landis’s team also tracks early use statistics and plans to conduct user satisfaction surveys. So far, she says, the top search term for app users is the Chick-fil-A restaurant.

“I love that,” she says. “That makes sense; if you are there visiting family all day, you need a little Chick-fil-A or a little Starbucks. That really makes us put ourselves in our patients’ and ­visitors’ shoes.” In November, Brigham and Women’s Hospital in Boston also rolled out a mobile wayfinding tool after a year and a half comparing solutions and studying infrastructure challenges, and several more months conducting beta testing. 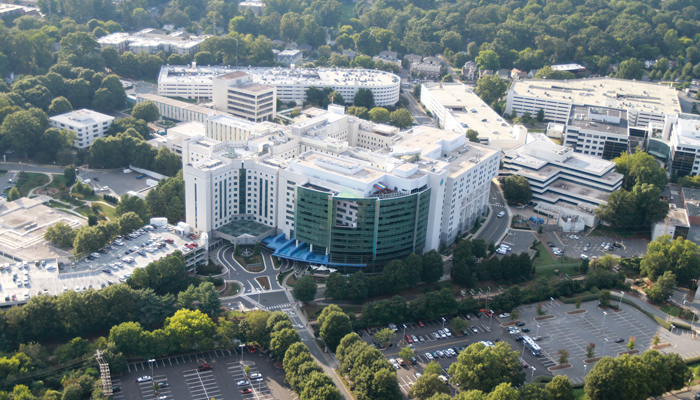 The preparation also included the development and deployment of a mobile-responsive website that offers directions to locations in the hospital from anywhere else on the campus, or from a person’s home address. Once inside the hospital, users are sent access to step-by-step walking instructions and a map. Visitors then are able to search for desired locations by the name of the clinic, service line or patient floor.

“We spent all of that time looking at the state of technology and thinking about what is really ready from a solutions standpoint,” says Josie Elias, program manager for digital health innovation at the Brigham Digital Innovation Hub (iHub).

With the analytics and learning gleaned from that effort, the iHub team built out a native mobile app for iOS and Android.

“We wanted to stand something up and allow ourselves the flexibility to continue growing and address the fact that some types of patients and visitors will gravitate toward one technology versus another,” Elias says.

The solution takes advantage of Wi-Fi, geomagnetic positioning and beacons to continuously guide users with minimal service interruption. And to make the app even more practical for users, Brigham and Women’s staff worked to ensure that when patients receive text reminders about their upcoming appointments or procedures, embedded in that reminder will be a link to the app that provides customizable directions.

“That feature has correlated with increased use of more than 1,000 percent,” Elias says. “The patients love it, and it made a noticeable difference in their experience.” 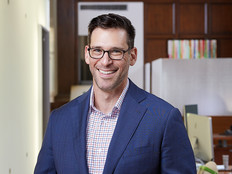 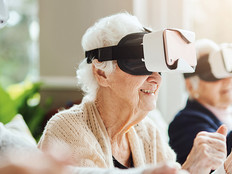 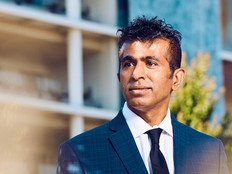