It’s not just hospitals and private practices that are getting in on telemedicine. Insurance providers have also begun offering virtual visits to plan members.

Recent reports showcase the capital returns for providers and patients alike when it comes to using telehealth, as patients save on time, travel costs and lost wages. Insurance companies are keen to tap into the convenience factor of video conferencing doctor’s visits.

"For busy moms, when it's 9 o'clock at night and one child is sick, they're often trying to figure out the next day how to get out of work, get the child to a pediatrician and call them out of school. But we've heard rave reviews from happy mothers who have been able to streamline that process into a 15-minute virtual visit," Anthem's John Jesser, who's charged with the success of the health payer's LiveHealth Online telemedicine offering, told FierceHealthcare.

He describes this as one impetus for the virtual-visit tool, which Anthem launched in 2012 for urgent care and has since expanded to include behavioral health visits.

Aside from Anthem, other payers, including Aetna and Cigna, have also launched telehealth offerings for plan members over the last few years.

Most recently, the University of Pittsburgh Medical Center Health Plan has joined the trend, launching in March a smartphone app–based version of its telemedicine service for plan members across Pennsylvania.

AnywhereCare, which is an extension of a desktop telemedicine offering launched in November 2016 for health-plan employees, provides video visits from UPMC emergency room clinicians via smartphone, tablet or laptop. The service, despite being provided by ER professionals, is meant to treat patients in non-emergency situations that require urgent care, such as respiratory illnesses and sore throats.

"UPMC members and patients now have access to a UPMC physician, 24 hours a day, seven days a week through their computer or mobile device," said Kim Jacobs, vice president of consumer innovation at UPMC Health Plan, in a statement. "Using AnywhereCare, patients can initiate a visit with a UPMC physician without traveling to an office or taking time off of work. AnywhereCare visits are low cost, typically about half the cost of a health care plan copay, and they allow patients within Pennsylvania to be cared for by UPMC clinicians in their homes, at work, or on the road."

The average wait time for patients via the telehealth service is just over six-and-a-half minutes, according to UPMC, shorter than the average in-person wait time and without the need for travel.

Moreover, with UPMC standing as one of the largest health systems and insurers in the state, the service is expected to relieve much of the strain on clinicians as well.

"AnywhereCare also helps to free the backlog in doctor's offices, urgent care facilities, and hospital emergency rooms and allows doctors to spend more time with patients who suffer from chronic conditions. Nearly 90 percent of patient issues are resolved during the AnywhereCare virtual visit and do not require follow-up care,” Jacobs added. 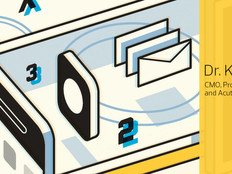