Just a few short years ago, a device like the HPE 3PAR StoreServ 8200 2-node Storage Base hard drive array would be deployed as several piecemeal components, managed separately. The elegance and ease of use alone when adding storage capacity through the StoreServ would make it a great fit for almost any data center, whether built-out from scratch or expanding on an established base.

For healthcare, the StoreServ 8200 checks all the right boxes in terms of redundancy regulations, or for use in disaster recovery. The array offers redundant power as well as cooling fans.

The 24 2.5-inch drive bays are designed to be used with flash disks, and the entire array is optimized for it. That includes four incredibly fast 16-gigabit-per-second Fibre Channel ports, which allow the flash technology to truly work as intended as a close second in speed to RAM, also expandable. While our unit had the standard four channels, optional configurations allow up to eight more. Almost no application today would require more speed from its storage.

We set up several virtual machines through VMware vSphere using the 8200 as the storage unit and were pleased to find that they were available instantly. There was no storage bottleneck at all, even when all of the VMs were pushed to capacity. In almost every other system we’ve tested over the years, the storage component for something like virtual desktops was, at the very least, a latency hiccup — not so with the StoreServ 8200.

HPE’s StoreServ 8200 will allow healthcare users to consolidate disparate storage appliances into enterprise flash, expand capacity as budgets allow, and manage everything under a single, lightning-fast interface that puts storage on par with the rest of the components of most data centers. 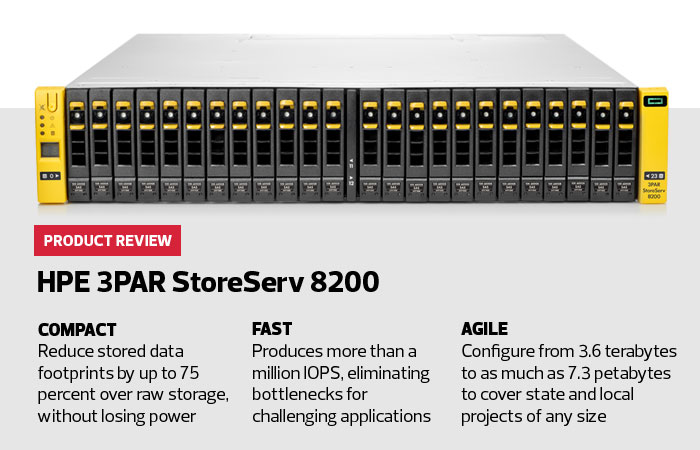 As any storage administrator knows, adding capacity to a large enterprise or data center isn’t as simple as plugging in a drive or even an array. There are two main types of storage systems, and they generally don’t mix very well.

File-level storage is what most users experience every day on a desktop. Stored files are arranged into protocols like NSF or SMB/CIFS, and function no differently through the storage system than through the client machines that open them. In addition to most client devices, it’s the storage system used in almost every network-attached storage device.

The advantage of file-level storage is that it’s extremely easy to maintain while capable of supporting access control over directories, drives or even individual files. It’s not the most efficient in terms of file transfers, making it less suitable for demanding applications such as large scale database storage.

By comparison, block-level storage is mostly used by storage area networks. There, each volume can become an independent drive managed by a storage server appliance. It can use SCSI for fast communications and generally is considered more reliable — certainly faster — than a file-level storage system. Block-level storage is almost always used for demanding applications such as virtual desktop installations.

Often, administrators get locked into using one type of storage system or the other, or need to maintain separate ones for different applications. The HPE 3PAR StoreServ 8200 is one of the few devices available today that can bridge that gap to support convergence of the two systems in the same data center. In this test, we had the opportunity to see an 8200 working toward that goal.

Performance on both systems was unharmed from having the other there. Management of the two file systems was fairly seamless, providing a glimpse into what may eventually be a true convergence of what once were completely incompatible storage systems.