In hospitals and other healthcare settings, proper labeling of items such as medicine and specimens is critical. If an item is mislabeled, a patient could be misdiagnosed or even be given incorrect treatments.

Ideally, clear and readable labels should be produced as specimens are being taken, right at the bedside of the patient for maximum accuracy. But that’s not always easy. Printers are generally too large and unwieldy to wheel around hospital corridors, and labels created by hand may be inaccurate or unreadable. The Zebra ZQ610-HC mobile printer was designed to perfectly address these issues in a healthcare setting.

The ZQ610-HC is a relatively tiny printer — so small that it even comes with an optional belt clip so clinicians can carry it with them on rounds. It uses thermal printing technology, so users don’t need to worry about replacing ink or consumables other than the special paper it requires.

Designed for full portability, the ZQ610-HC comes loaded with everything it needs to operate, and can connect with wireless networks as well as iOS, Android or Microsoft Windows devices through 802.11ac Wi-Fi or Bluetooth 4.1 channels.

Each ZQ610-HC has a rechargeable battery designed to operate for an entire shift on a single charge. When the battery is running low, it can either be recharged inside the printer or a new one can be quickly swapped in. Optional battery charging racks are available if a hospital requires continuous uptime for a fleet of mobile printers.

The ZQ610-HC is speedy. In my testing, it was able to churn out about 3.5 one-inch labels every second. Labels are printed in monochrome and are very readable, with a resolution of 203 dots per inch. The printer has special sensors that can detect where labels begin and end, ensuring that they are printed one at a time despite the speed. The ZQ610 can print stickers too, so they can be immediately applied to specimen vials, medicine bottles or anything else that needs proper labeling.

Rounding out its healthcare-ready features, the Zebra ZQ610-HC has been ruggedized to withstand multiple 5-foot drops onto concrete. It is IP43-rated against dust and water ingress, and its disinfectant-ready plastic case can withstand the constant wipe-downs required in a hospital environment.

In healthcare, accuracy is critical, and the Zebra ZQ610-HC mobile printer proves that it’s the right tool for the job. 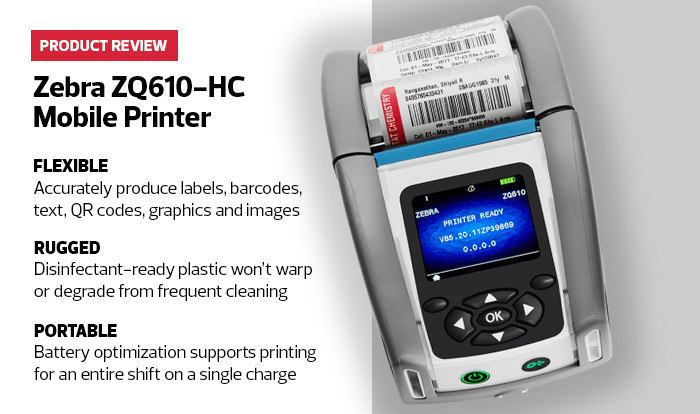 Portable printers such as the Zebra ZQ610-HC bring healthcare labeling to the patient’s room.

A Printer That Keeps Going in Healthcare Settings

Having a mobile printer in a healthcare setting is truly useful only if its battery is able to hold a charge for an entire shift and be recharged again and again over a period of months or years. Even the most advanced battery will lose its ability to maintain a charge over time, so the key to avoiding downtime is knowing when you need to replace a battery altogether.

Zebra delivers this capability with its PowerPrecision batteries, including those found in the ZQ610-HC mobile printer. Each PowerPrecision battery can report not only its charge level, but also its overall health. It does this directly though the printer’s LED screen, and also sends status updates to a mobile device management platform for remote monitoring.

Battery health was very good on the printer I tested, as one would expect in a new product. Battery status is reported using two units of measure: charge level and general battery health. A battery that is 99 percent charged and at a high level of health is going to operate at a high level, whereas one that is at 99 percent and low health may not last as long.

The PowerPrecision battery’s measure of health translates to capacity. A battery in poor health might be able to hold only 50 percent of the charge it could store when it was new, but it will still report as fully charged. By adding the overall health metric, Zebra lets administrators see how their printer batteries are really doing. Armed with that information, healthcare IT teams can plan ahead to replace their batteries long before they start dying in the middle of a shift.