Is it possible to launch a new device that cuts costs, simplifies workflow and requires no formal training from staff? At Connecticut-based Middlesex Health, the IT team already has. In an effort to replace the clunky, state-issued computers its paramedics and staff were using, the organization turned to ruggedized Chromebooks originally built for the education sector, and with the changeover immediately saw improvements in budget and workflow.

How can healthcare organizations replicate this success? HealthTech spoke with Michael Romatzick, desktop architect at Middlesex Health, on the lessons the IT staff learned from the organization’s Chromebook deployment.

VIDEO: What is a digital workspace and why is it the future?

HEALTHTECH: What was the timeline of the Chromebook rollout?

Romatzick: Generally, because of high liability and overall risk, we avoid testing new technology in the patient and critical areas. For this reason, we started the rollout in 2015 by deploying Chromebooks just in the business office. By 2016, the project had spread to smaller, nonclinical operations. Once we saw how easily the staff adapted to the Chromebooks and how simple it was to manage and set centralized policies, we felt comfortable deploying the devices to emergency medical technicians, starting the rollout for EMTs in the fall of 2016.

HEALTHTECH: What kind of cost savings have Chromebooks afforded Middlesex over the previous computers?

Romatzick: When you take into consideration accessories and maintenance costs, the old, ruggedized machines could run up to $5,000 per unit. They were very expensive and difficult to service. In contrast, the ruggedized Chromebooks geared for the education market cost roughly $230 per unit. Over the course of two months we were able to replace 12 devices for less than the cost of one of the traditional units.

HEALTHTECH: How did you seek to change your device deployment methodology with this rollout?

Romatzick: IT departments need to analyze their workflows and give users what they need to do their jobs without the extra overhead. In some cases, they may only need two or three applications to stay effective. For example, remote, on-call doctors typically need access only to medical records and a browser for web and email use. These needs are similar for EMTs. In the old environment, security required disk encryption, anti-virus software, and additional applications added time to every user’s day, slowing productivity.

All it takes to work the device is to open it up, and then it’s ready to go in seconds. Once people saw that, they understood why we were making the change.”

HEALTHTECH: What kind of training was required to get people up to speed?

Romatzick: That was the beauty of this Chromebook rollout. Because many of the staff were already used to the Chrome browser and the G Suite applications, training was minimal. It focused more on familiarizing people with the Chromebook keyboard layout and the lack of management software which they had become accustomed to. There was a bit of trepidation on the part of some of the senior staff, but many of the younger staff, who had used the devices throughout their education or in their personal life, bridged that gap for their coworkers and even taught us a few tips and shortcuts.

HEALTHTECH: What ultimately sold the staff on using the Chromebooks?

Romatzick: All it takes to work the device is to open it up, and then it’s ready to go in seconds. Once people saw that, they understood why we were making the change.

IT departments that want to undertake a similar rollout should understand that the technology itself wasn’t the largest challenge — it rarely is. The greatest obstacle had to do with administrative and general human relations: getting a group of people to make a change as well as embrace new technology and workflow. While staff certainly understood the cost savings these devices offered in a budget-conscious environment, in many ways, it’s difficult to explain the benefits of the Chromebooks until users take some time to work with them. From there, they often realize how much more mobile, reliable and convenient the devices are over the old tools. 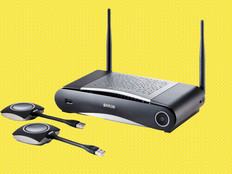