After nearly six years of relying on clunky and slow shock-proof computers for electronic charting, paramedics in the field for Connecticut-based Middlesex Hospital found the devices just weren’t cutting it. Originally issued by the state, the computers were not only cumbersome and slow to start, but costly to maintain and time-intensive to manage — not to mention that the battery life wasn’t sufficient for busy paramedics with long shifts.

The computers had become the industry standard, however, because of their durability, which lead the hospital on a search for a rugged device that would better support the workflow for the paramedic team, explains Jim Santacroce, manager of Middlesex Hospital’s Emergency Medical Services.

Enter the Chromebook: The rugged, inexpensive and easy-to-configure device not only held up to the daily wear and tear, but also — when paired with Chrome Enterprise — simplified workflow for paramedics by offering secure access to apps and virtualized clinical software.

“The ruggedized Chromebooks that were made for education seemed to be the most durable, and we could manage the devices with Chrome Enterprise licenses,” explains Santacroce. “We wanted to make sure they were going to last, and after trying them out, we did not have any problems or hiccups.”

VIDEO: What is a digital workspace and why is it the future?

In December 2016 — just a month after deciding to move away from the state-issued computers — the IT team distributed the needed 12 Chromebooks to the hospital’s paramedics. Because the hospital already used Google Chrome as its primary browser and the hospital had a web-based electronic health record system, there was no learning curve for the members of the paramedic team.

“There was no formal training necessary — that was kind of the point,” says Santacroce. “How simple and efficient can we make the experience?”

Moreover, when weighed against the costs of maintaining the existing solution, the move to Chromebooks paid for itself, says Michael Romatzick, desktop architect at Middlesex Hospital.

“Repurposing the budget for a single device slated for replacement paid for the entire switch to Chromebooks for the department, including spare devices, with funds left over,” explains Romatzick.

Moreover, while maintaining the tech used to be time-consuming, now, the IT department gets only one or two calls a year for the devices, says Romatzick.

“The interaction between users and our support team used to be frequent and stressful due to the difficulty in remotely connecting to a device that was unable to boot into Windows. Those issues have disappeared with the Chromebook deployment,” he says. “And since we were already managing the Chrome browser, it made the addition of Chromebooks simple for IT.”

In addition to being lighter and easier to use, Romatzick also touts the security benefits Chromebooks offer the hospital, particularly with safeguarding protected health information.

“When using Chromebooks and a web-based electronic health record, nothing lives on the actual device,” explains Romatzick. “With Google policies applied to the devices, we can not only ensure that no data is stored on local devices, but also we know who was operating a Chromebook at any given time.”

Furthermore, the Chromebooks are set to wipe themselves clean between each user, guaranteeing that nothing is left behind from previous sessions; and if a device is lost or stolen, the IT team can immediately and remotely decommission it.

While the rollout is complete for now, the IT team has their eye on new uses for the device that will smooth the workflow for paramedics and clinicians, allowing them to keep their focus on patient care.

“In the future, we plan to use the Chromebook’s camera to securely place photographs of patient documents directly into our record system,” says Santacroce. 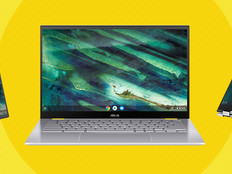