Last fall on this blog, I wrote about the opening of a new facility in Louisville, Ky., called the Thrive Center, which not only showcases many of the latest technologies enhancing senior care, but also serves as a meeting destination for industry leaders, educators and others interested in the space.

Fast forward a year, and it’s clear the organization has built a reputation among senior care leaders — not just in the U.S., but abroad as well — as a go-to location to learn about innovation in the industry.

According to Thrive Center Executive Director Sheri Rose, nearly 100 organizations from 17 states, including providers and government agencies, have visited the facility since its ribbon-cutting ceremony in October 2017. What’s more, nearly 90 entrepreneurs and vendors from 22 states and five countries have also visited, sharing their wisdom, learning from Thrive and continuing the conversation about technology’s role in senior care.

“We’ve learned a lot in a year,” Rose says. “We will evolve based on our learnings about where we need to take this organization and how we can continue to serve the industry and drive quality of life for our aging adults.”

“We take the fear out of technology,” she adds. “By doing that, we invite seniors and organizations to just engage with it.”

A Focus on Caregivers in Senior Care

One way the Thrive Center educates visitors to the facility is by focusing on annual themes within the industry. The organization’s opening theme centered on memory care and dementia; the coming year’s theme pivots slightly from there to focus on the caregiving side of the industry.

“For example, I’m meeting with the Alzheimer’s Association, and together we’re going to curate the research message that we want to give. We’re going to set up labs where professional caregivers or caregivers at home will be able to walk through and see what it’s like through the eyes of someone with Alzheimer’s disease,” Rose says.

“Our mission is focused on living and thriving, not aging and dying,” she says. “We’re trying to give caregivers a feel for working with seniors.”

Recognition for Thrive Center at Home and Abroad

The Thrive Center continues to be recognized for its approach to digital health and education in the senior care space. It recently was nominated for a MediStar Award for health innovation, and Rose says that several industry leaders from around the world have asked how they can start similar efforts in their countries.

Hosting so many groups and individuals has really helped to put aging into perspective for Rose.

“What we’ve learned is that aging is not just a U.S. issue, but a global issue,” she says. “Sweden doesn’t have near the population that we have, and neither does Australia, but they’re all facing this baby boomer tsunami. What we’re able to do is forge those international alliances so we can talk about what’s going on together.” 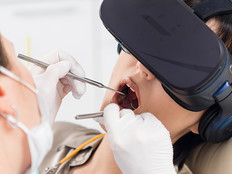