When CentraState Medical Center began drawing electricity from solar panels in 2015, leaders at the Freehold, N.J., hospital were surprised that their energy bills weren’t going down.

“At first, we were expecting immediate results, but then we learned the process involved,” says Thomas Scott, CentraState senior vice president and COO. It didn’t take long. A year into using the panels, the facility saw a $300,000 reduction in energy costs. “It’s a nice savings for the hospital, in addition to being green,” Scott says.

Energy conservation is a high priority in an industry that spends billions on facilities and equipment to keep pace with patient needs. Innovative healthcare organizations such as CentraState are finding ways to reduce their energy consumption and costs by deploying technologies to improve efficiency.

Tools that manage energy use can alert administrators when anomalies occur so they can be proactive in repairing or replacing equipment. Some even calculate added energy costs if organizations continue to run failing or outdated equipment, says Kara Brooks, sustainability program manager at the American Society for Healthcare Engineering. For instance, monitoring-based commissioning analyzes real-time information from equipment to identify mechanical issues and ensure efficient operations.

Take Control of Power Consumption, Even on Vacation

ASHE helps organizations create a culture around energy efficiency with Energy to Care, a free program that offers a dashboard for hospitals to measure their energy use, compare their savings with similar facilities and get recognition for their conservation efforts. “This is where the field is going,” Brooks says.

Florida-based Watson Clinic has seen a big drop in its energy consumption through steps such as converting to LED bulbs with light-harvesting capabilities (the light dims as the sun comes up and brightens as it sets).

“Everything there is LED, inside and outside,” says Watson Clinic Facilities Director Gary Picklesimer. “It’s a huge savings.” 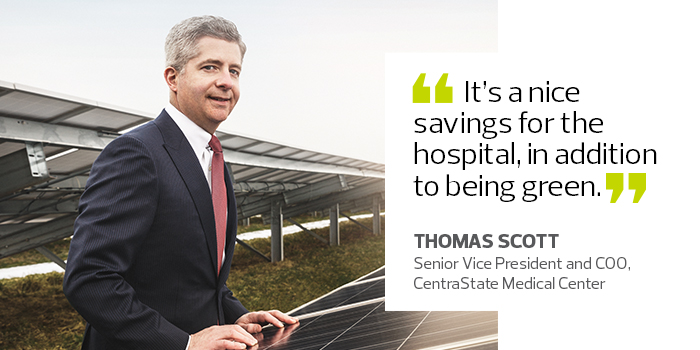 But the single biggest step any organization can take to reduce its energy use is to employ automated building controls, Picklesimer says. Watson Clinic has used Schneider Electric systems for 17 years, and in 2016, it upgraded to its open-platform EcoStruxure Building Operation solution, which employs wireless communication, the cloud and data ­analytic technology to control energy, lighting, fire safety and HVAC systems.

Sitting in the main clinic in Lakeland, Fla., Picklesimer can see exactly what’s ­happening in the medical group’s 16 other locations. He can monitor ­temperature, humidity, set points, ­lighting, heat and more.

“I can view almost everything that operates in the buildings,” Picklesimer says. “The system basically runs on its own,” even shutting down equipment after the clinic closes.

The biggest advantage, he says, is that he and his staff can easily pinpoint problems with equipment, which simplifies maintenance. “We used to have four or five AC guys. Now one person can monitor everything. Even on ­vacation, I can see what’s going on.”

CentraState Harvests the Sun with the Help of Vendor Partners

Solar installations aren’t always feasible for hospitals because of the lack of space for panels. CentraState is fortunate in that it owns a large portion of undeveloped land on its campus to devote to such an undertaking.

The hospital licenses the land to KDC Solar, which constructed a ground-mounted photovoltaic solar project. Additionally, power management company Eaton supplied a pair of inverters that help to transform the direct current derived from the panels to alternating current.

CentraState purchases electric power that is generated from the solar project through a 20-year contract with KDC Solar. “We had the opportunity to get some cost savings without having to put any capital up,” Scott says. “For any organization, that’s a win-win situation.”

The 7-megawatt solar farm can supply up to 30 percent of the electricity needed by CentraState, which uses as much as 23MW of power per day. The solar facility produces extra power in daylight, then banks it for ­evening hours when the sun’s not shining.

CentraState is credited for any electricity it does not use — a process called net metering. As those credits increase, CentraState can use them and draw less electricity from its utility.

The savings are so substantial that the hospital and KDC Solar plan to add 5.5MW solar carports on campus. In addition to increasing CentraState’s solar power from 30 to 50 percent of its energy use, it would provide the facility with covered parking.

Another advantage: Solar power costs are fixed, so by signing a 20-year contract, CentraState can forecast long-term energy costs, which is impossible when retail or third-party energy prices are limited to two or three years at most and affected by fluctuating fuel costs. “In our case, we set the price for the entire 20-year period,” says Alan M. Epstein, president and CEO of KDC Solar. “It’s just a question of the sun shining and how many ­kilowatts of electricity we can produce.”

“This takes a lot of the volatility out,” Scott says. “That’s been a big benefit from a budgeting standpoint.”

In addition to the $300,000 annual savings from the solar installation, which will increase if utility prices rise, CentraState invested the money it saved into other energy-efficient products at the hospital, such as LED lightbulbs and more efficient HVAC equipment, to further reduce its power consumption.

Nemours Children’s Hospital, which opened five years ago, has used energy-efficient equipment from its inception, says Nelson Roque, director of campus plans and operations at the Orlando, Fla., facility.

“There are a lot of little things that contribute to the overall efficiency of the hospital,” he says. “It’s something we consider whenever we buy a new piece of equipment.”

But it’s not the only consideration. Reliability and service are priorities for any hospital, particularly during hurricane season. “We can’t afford to be down for two weeks to wait for a part,” Roque says.

The facility also uses Schneider Electric software to monitor its incoming power and electrical filters and ensure it has appropriate harmonic balance in the equipment.

Last year, the system flagged some minor spikes and drops in the power supply feeding the lab equipment. “We would not have detected that without the monitoring equipment,” Roque says.

In addition to uncovering the problem, the software provided data to show the utility company what was happening, which convinced them to replace the main feeders so the hospital would have cleaner, more reliable power.

“Ninety percent of our equipment was unaffected by the fluctuation,” Roque says. “But these are very sensitive pieces of equipment, and the power’s got to be pretty much perfect. 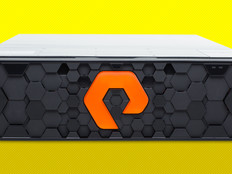