We all know the feeling of our heart pumping away in our chest as an opponent scores, or the adrenaline spike that accompanies a winning goal. But now, thanks to the help of Nokia's hybrid smartwatch and 7,000 French soccer fans, we have proof of the physiological effects of excitement and disappointment during sporting events.

As part of a study that relied on volunteered and anonymized data during the 2018 World Cup Final, Nokia has gathered data on heart rates of French users as they watched the France vs. Croatia final.

According to a blog post from Nokia, "the highest BPMs (beats per minute) during the final were recorded during France’s 2:1 lead, and then again during the team’s historic final goal."

Moreover, men, on average, seem to get more worked up when their team scores. Men's heart rates spiked past women's heart rates during most goals, except for the final goal when men and women had nearly average beats per minute (men 96.1, women 96.4 BPM). And younger groups experienced higher heart rates, with the youngest group involved in the study, age 20 to 29, peaking at an average of 105.1 BPM during France's second goal.

Check out the graph below, provided by Nokia, to see how excitement and disappointment impacted fan heart rates during critical moments in the 2018 World Cup Final. 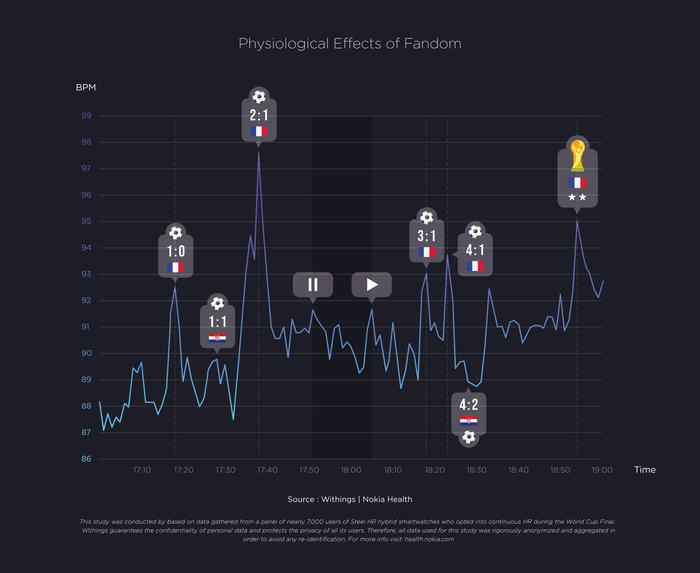