Many of us may dream of the day that the Domino's pizza delivery drone can drop hot pies at our doorsteps, but the technology's potential extends far beyond feeding hungry patrons. While tech giants and big retailers, including Amazon and Google, are testing drones for deliveries and pickups, drone trials also are being conducted across the country as researchers and medical organizations seek to introduce the tech to healthcare.

Although regulatory hurdles persist, drone manufacturers such as DJI are working to make drones more affordable, sturdy and Federal Aviation Administration-compatible with each passing day. Meanwhile, researchers are already at work testing how drones can offer better care to disaster victims, deliver defibrillators to those in cardiac arrest and drop medicine to remote areas of the country.

After a natural disaster, it can be more than difficult to reach those in need of medical care. While telemedicine services can offer a lifeline to patients after disasters, as it did after Hurricanes Harvey and Irma, the service is limited to those who have access to reliable internet connections.

For this reason, the William Carey University College of Osteopathic Medicine in Hattiesburg, Miss., has been developing and testing drones that swoop in to deliver telemedicine kits to victims of natural disasters. The project, known as HiRO (Health Integrated Rescue Operations), was developed by Italo Subbarao, senior associate dean at WCUCOM, and Guy Paul Cooper Jr., a fourth-year medical student, after a devastating EF-4 tornado struck Hattiesburg in 2013, leaving many stranded without medical care.

"We asked the question, given the evolution of technologies, couldn't we do this better," Subbarao tells Healthcare Dive. "Could we not take a highly advanced drone and combine it with an innovative telemedical kit and fly it over the person's house, get eyes on the scene, land and deploy this medical kit?"

The two went to work and have since developed the kit, which opens to reveal a physician on-screen who can direct treatment. It also includes Google Glass, allowing wearers to move freely and treat themselves and others hands-free while staying in contact with the doctor.

"These drones have impressive lift and distance capability, and can be outfitted with a variety of sensors, such as infrared, to help locate victims," Dennis Lott, director of the unmanned aerial systems program at nearby Hinds Community College and collaborator on the HiRO project, said in a statement. "Working together, we're able to develop, test and bring this technology to the field. It is just a matter of time before the drones are universally adopted for emergency and disaster response toolkits."

Defibrillator Drones Take to the Skies

Of the nearly 360,000 cardiac arrests that happen outside of hospital settings in the U.S. each year, less than 10 percent of victims survive, according to the American Heart Association. This is often because a defibrillator, or AED, isn't readily available to assist those who go into cardiac arrest.

To reduce the time it takes to reach cardiac arrest victims with an AED, researchers in Sweden have developed drones fitted with defibrillators.

"This is a really neat, innovative method to combat a problem that we have been struggling with for decades," Michael Kurz, an associate professor of emergency medicine at the University of Alabama-Birmingham and an American Heart Association volunteer, tells NPR. "It's the same reason we have public access to defibrillation. Airports, casinos, large public venues have AEDs on the wall because presumably, it would take a while for EMS to get there. This is, like, public-access defibrillation on steroids, where we just bring the defibrillator to you."

The aim is to deliver a defibrillator to people in need within minutes, dramatically improving their chances of survival.

"We know that healthcare professional CPR is better than layman [CPR]. But we still believe that if we can deliver a defibrillator within five minutes, the proportion of people with shockable rhythms could be pretty high," Andreas Claesson, the letter's lead author, tells NPR.

Drones Fill in the Gaps for Rural Healthcare

It's not just disaster victims that are difficult to reach. Many people live in remote regions of the U.S., sometimes hours away from the nearest care facility. It can be difficult for facilities that do provide care in these remote areas to carry all the necessary supplies.

For this reason, providers such as The Health Wagon, a mobile operation that delivers care to the rural Appalachian region of Southwest Virginia, have been working to deliver medications and medical supplies via drone.

"The use of a drone to deliver medications to patients in need or to take supplies from our stationary clinics out to our mobile unit would be highly beneficial and meet crucial needs. Embracing this technology would give rural communities such as ours distinct advantages in the delivery of healthcare," The Health Wagon says in a blog post on its site.

While there are still several regulatory hurdles to cross, Teresa Gardner Tyson, The Health Wagon's executive director, tells Rural Health Information Hub that the nonprofit still anticipates that the technology will help supplement many of the health services it offers.

"We're all the mobile health available here in the mountains. You can't foresee everything that you're going to need on a daily basis," Gardner Tyson explains. "You're going to get out in the field and maybe we didn't pack sutures and we have somebody come in with lacerations, or maybe we didn't have this particular type of insulin but we've got it back at the field office."

Drones could be the missing link that gather and deliver these supplies to clinicians in the field. 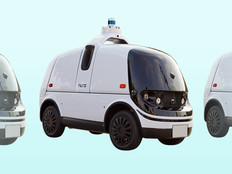