Though colleges have found a number of uses for 3D printers, from creating toys and art to building models of molecules, Massachusetts Institute of Technology is among the first to make strides in making the mainstream 3D printing process more organic.

Other researchers have made attempts to use cellulose but failed because the traditional 3D printing process, where plastic polymers are heated up to become malleable, would cause the cellulose to thermally decompose. Pattinson says MIT was able to overcome this issue — caused by special hydrogen bonds — by using cellulose acetate, a derivative with fewer of the problematic bonds, dissolved in acetone.

“Acetone has a very high vapor pressure, which means that it evaporates very quickly. It’s quite a clean printing process,” says Pattinson.

Not only would printing with cellulose be more environmentally friendly and cost-effective, but Pattinson says these cellulose polymers could be stronger than traditional plastics and quicker to manipulate because the process requires no heating.

Cellulose is also malleable in the sense that certain properties can be added to it during the 3D printing process. For example, Pattinson says his team added antimicrobial dye to a set of surgical tweezers so that it could kill bacteria when a fluorescent light is shined on it.

“Cellulose is such a versatile material. You can introduce so much different functionality, which is why it’s used in so many products,” he says. “With it, you could produce medical tools that are sterile and tough and can be used in remote regions.”

Universities Are at Forefront of 3D Printing Innovation

This is not the first instance of a college leading the charge in exploring the furthest limits of the 3D printing process.

A research group at Carnegie Mellon University was able to print a replica of a human heart out of organic material on a consumer-grade printer, reports The Surge.

Though that heart likely wouldn’t be accepted by a patient needing a heart transplant, the university has set up future medical breakthroughs by creating a method to boost the structural integrity of these organic materials.

“3D printing of various materials has been a common trend in tissue engineering in the last decade, but until now, no one had developed a method for assembling common tissue engineering gels like collagen or fibrin,” says research lead T.J. Hinton in the article. 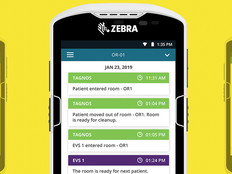 Pros and Cons of Smart Speakers in Hospital Rooms

Why Rugged Devices Are Necessary for Nurses

How to Stay HIPAA Compliant from Home