George Blankenship believes that when it comes to innovation, the possibilities are limitless.

The former Apple and Tesla executive, who spoke Wednesday morning at the Argentum Senior Living Executive Conference in Nashville, Tenn., says that mindset is imperative for leaders who aim to transition the senior living industry into a more customer-friendly and technologically savvy enterprise.

“Nothing should be impossible” when you think about caring for seniors, said Blankenship, who defined innovation as simply looking at things that already exist and making them better.

Both Apple and Tesla did just that by building on current tools — cellphones and cars — and tweaking them to better meet customer wants and needs, he said. He also noted that service elements like Apple’s Genius Bar have helped to change the perception of customer experience and build brand loyalty.

“The first three years I was at Apple, every Tuesday morning for three hours I had a meeting with Steve Jobs where we talked about the customer experience and the design of the stores,” he said. “First you design a great space … then you deliver a great experience.”

To change the experience in senior living, executives must think ahead to what their future residents will perceive as quality service, Blankenship said. “Most of you have been working with people from the silent and boomer eras. Pretty soon you’ll be working with Gen Xers and your employees will be millennials.”

Both groups increasingly want to experience the world, he said. To do so, however, they need to save time. To that end, Blankenship discussed the current use of tools like artificial intelligence and drones in retail, and how the former allows consumers access to services through simple voice commands.

Making Headway with Tech Resources You Have

Senior living communities such as Masonic Homes of California, Masonic Homes of Kentucky and Benchmark Senior Living in Waltham, Mass., already are looking ahead, teaming with technology partners to pilot the use of tools such as wearables and analytics. The goal: engaging residents and helping them to stay healthier.

While such efforts represent the early stages of innovation, others in the industry should not let today’s hurdles determine tomorrow’s outcomes, Blankenship said.

“When I do these presentations, I get a lot of ‘interesting, but…’ ” he said. “People will see me in the hall and say, ‘George that was interesting, but here’s why we can’t do it. Here’s why it can’t work in our industry.’ That’s so unfortunate because it’s such a quick response; you don’t think about what the actual opportunity could be.”

Blankenship’s take on helping older adults get the most out of their golden years in senior living communites is a simple, straightforward one: You don’t have to reinvent the wheel; instead, embrace the resources you have and think outside the box.

“Sometimes to change the world, it feels like you have to do the impossible,” Blankenship added. “You should be looking at what’s going on around you that could turn into something that’s really spectacular.” 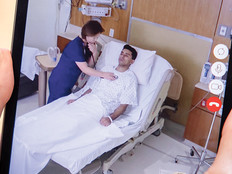 How a California Program Puts Technology in the Hands of Seniors

How Do Patients View Virtual Care?

How Hyperconvergence Supports the Demands of COVID-19 Reporting