By slipping on a virtual reality headset programmed with vivid, 360-degree scenes of nature, wildlife and familiar places such as a user’s childhood home, residents in senior care settings can gain an exciting new outlook.

“Older adults didn’t grow up with all of this magical technology,” Brian Geyser, vice president of clinical innovation and population health at the Connecticut-based organization, tells HealthTech. “For an 85-year-old person to put on a pair of lightweight goggles and be immersed in a world that seems very real is pretty amazing.”

It’s also beneficial: 9 in 10 elderly adults reported feeling more relaxed and rated their well-being higher after engaging in VR sessions, according to a 2018 study conducted at a senior care residence in Minnesota.

Viewers can see the world, rekindle old memories and interact with each other — even while quarantined.

“Our residents really enjoy that feeling of being inside of this world, but also being together,” Geyser says. “Traveling is fun, but it’s a lot more fun if you’re with the people you love.”

He spoke more about the VR effort and its surprising impact:

HEALTHTECH: How did you get started with a VR program?

We’ve been doing VR since 2017. Early on in my tenure at Maplewood, I ran across the Rendever story and I was intrigued. It was a startup company at the time; these guys from MIT who created a VR platform specific for senior living.

I hadn’t heard of anything like this before, so I decided to contact them and have a conversation, which resulted in Maplewood doing a pilot.

We were just astounded at the results and the impact on residents when we did the pilot in several of our Connecticut communities. The residents were blown away by the experience and they couldn't stop talking about it. I had never seen a reaction like that to any program that we’ve ever offered. They were calling it magical.

HEALTHTECH: What were some of the first “experiences” offered to residents?

I remember specifically, it was virtual tours to places where they otherwise would never be able to go — like Antarctica. It was the combination of feeling like you’re standing in Antarctica, but at the same time these penguins are moving all around you.

Residents were reaching out; they were laughing and talking to each other, saying, “Oh, turn to the left, look at the guy over there.” It wasn’t an animated gaming environment. It was real-life footage, so it felt very real to them.

Then, we took them into a “puppy pen” where they were surrounded by little puppies; seeing the reactions, the oohs and ahhs, was just so beautiful. We also took them to Africa to hang out with some elephants. Anything with animals was a huge hit.

A closer look at VR programs in action at Maplewood Senior Living, which has used the technology since 2017.

HEALTHTECH: Where else can VR technology transport viewers?

We’re able to take people to familiar places, the places they’ve traveled to in the past, such as Paris or London. We can also take them back to a childhood home or maybe their high school and have them stand right there and see it as it is today.

Rendever uses Google Street View technology; you’re seeing it in a 3D environment, not on a flat screen.

We have residents who are just shocked they can see the house they grew up in. They’re pointing to their bedroom window and telling stories about a tree — there used to be a fort up there, and so on. It just brings this flood of memories back.

HEALTHTECH: How has using VR in senior care most surprised you?

It’s so social. All of the residents are in the same virtual environment together. So, you bring them all to the Eiffel Tower and they’re all looking up and they’re checking it out. And then someone will start telling stories about when they were there 50 years ago and the travel and the experience of being in France.

It really sparks conversation, and that was a big “aha!” moment for us.

The final thing that really pulled VR across the finish line for us is that the magic continued for days after the headsets came off. We would hear residents talking at dinner about the virtual travel they went on and how it affected them.

HEALTHTECH: How did you train staff to facilitate VR with residents?

An iPad serves as the control center. An activity programmer can use the iPad to select the virtual journeys. It's very easy technology to use.

We’re able to take people to familiar places, the places they’ve traveled to in the past, such as Paris or London. We can also take them back to a childhood home or maybe their high school.

HEALTHTECH: How do you manage demand for VR time?

We have VR programs scheduled into the weekly activity calendar. If there’s huge demand, we might add another. We also do one-on-one VR programming.

For some residents in memory care, VR can be a good distraction tool. If we know that every day at around 3:00 or 4:00 p.m. a particular resident gets agitated and we know VR can help calm them down, we actually put that in the care plan and use it as a therapeutic intervention.

HEALTHTECH: In what ways has COVID-19 affected VR sessions?

When the pandemic hit, Rendever worked with us and other early adopters. Based on our feedback, they developed a functionality called “connection corner.”

Each resident can now create a custom avatar for themselves, just like you would in a gaming environment. During quarantine, we can hand out 10 headsets to 10 different residents in their apartments. They put on their headsets and we can hold a group activity with those 10 people all participating at the same time.

We can take them, say, on a virtual tour to different museums, or we can play games like “I Spy” that are fully immersive. Residents can play against each other in the virtual environment, even though everyone is in their own apartment.

At the end of a session, all of the avatars are brought together into a virtual living room where users and the facilitator can talk as a group. It’s pretty astounding. 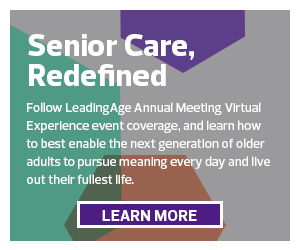 HEALTHTECH: What other new functions are enhancing VR in senior care?

Rendever is giving family members the opportunity to upload experiences via photos and videos — including 360 videos, if they have the right camera.

Say someone’s grandmother can’t go a wedding. An attendee could pull out a 360 camera and put it on a table and hit record. By uploading that file to the Rendever platform, the activity programmers in our building can load it into the goggles so the resident can literally be immersed in the wedding experience.

Rendever has also been able to create a network of its clients. Twice a week, they offer live VR programs for our residents to connect with communities across the country.

Now, we’re working with Rendever to use our strategic partnerships in New York with the Jewish Museum or the 92nd Street Y or the Metropolitan Museum of Art — these world-class institutions — to bring VR cultural programs to our residents.