Vice President and CTO Lynn Gibson wanted to work with individuals in several locations, but the health system had previously only hired coders available onsite at a CHRISTUS facility.

Deployment of a virtual desktop infrastructure changed all of that. With VDI, all compute and storage resources reside in the data center, while users gain access to virtualized images of their individual desktops, accessible from almost any device.

“Coders are a key portion of our business, and now we contract with the best,” Gibson says.

VDI provides access to all of the mission-critical applications healthcare staff and contractors need to perform their work while ensuring data remains secure within an organization’s network. The solution also holds the potential to create more efficient patient care and organizational productivity.

The Bureau of Labor Statistics estimates that the healthcare industry added 24,000 workers to its ranks in May 2017 alone. For many of those jobs, facilities must grant employees secure access to protected health information and other sensitive data.

VDI allows organizations to host an entire mobile workforce at a single location, such as within a care setting, IDC Research Director Robert Young says.

“A clinician can move from one device in a patient’s room to another in an office while the session stays live,” he says. “VDI provides continuous secure access to appropriate applications and data, and major platforms offer file sharing for collaboration.”

When Covenant Health completes its VDI rollout this fall, the Tewksbury, Mass.-based provider expects to support as many as 4,000 users, says Adam Sherwood, an enterprise infrastructure architect. Covenant, which operates facilities throughout New England and in Pennsylvania, aims to enhance security and manageability, but its chief focus has turned to efficient delivery of applications to users.

“No user will thank you for rolling out VDI and providing a nice Windows desktop,” he says. “Users need their individualized profiles; they need apps and they need to have the apps function together with data in the ways they’re used to. Users shouldn’t have to think about those things in technical terms.”

Sherwood calls such tools a good match for healthcare because of the time they save clinicians and other users as computing resources follow them through their workdays. In addition, VDI provides ample security for sensitive information, he says.

“By removing applications and data from network endpoints, it dramatically reduces the risk of intrusion and information theft,” Sherwood says. “It reduces the attack surface and simplifies downstream security management. There’s no need to encrypt the endpoints because there’s no data there.”

CHRISTUS, which operates more than 60 hospitals and long-term care facilities and 350 clinics and outpatient centers in Arkansas, Georgia, Louisiana, New Mexico and Texas, as well as Chile, Colombia and Mexico, has expanded use of its VDI to clinical and financial staff. It also deployed an Okta single sign-on tool to further maximize convenience and data security, Gibson says. Users can access key applications and their own desktop images through dedicated Dell Wyse thin client hardware, hospital computers and their own devices.

“Clinicians can pull up radiology data from anywhere,” Gibson says. “We’ve put our key apps, such as our electronic health record application, into the VDI system, as well.”

While the chief benefit of the initial deployment was the ability to cast a wider net for coding skills, the ease-of-management advantages and reduced hardware costs grow more apparent as more clinicians use the system, he says.

“We’re much more secure, patching is easier and quicker, and we’ve greatly reduced the need to buy fresh devices,” Gibson says. “We now spend our time maintaining the services we provide, rather than maintaining our hardware.”

Still, organizations must not approach VDI as a way to save a lot of money quickly or an easy way to make IT management headaches completely disappear, despite the technology’s ability to cut some costs, Covenant’s Sherwood advises.

“There are opportunities for cost avoidance but they don’t happen at once; there is still work to be done for IT, especially in the data center,” Sherwood says. “When you implement VDI, do your best to understand beforehand, through tools such as workflow analysis, how best you can create and increase value for your organization.”

The use of electronic health records (EHRs) provided the primary push for VDI adoption at LifeBridge Health, which operates four hospitals and several clinics in Baltimore. LifeBridge deployed VMware’s Horizon View VDI platform for employees who work onsite in its healthcare facilities and for remote workers, such as those who code and bill for services, says Jon Roenick, a systems engineer at the network.

“The EHR touches many departments — medical, financial, professional — and a lot of them require the same software,” Roenick says. “If we had an upgrade for a widely used application in the past, we needed to individually upgrade servers and devices.

“With VDI, we take a single image and create all the individual desktop upgrades from that one installation. It multiplies our productivity by leaps and bounds.” The infrastructure also seemingly eliminates disruptions that are caused by IT staff installing upgrades and applications or troubleshooting their individual devices, says LifeBridge Senior Vice President and CIO Tressa Springmann.

“I think about VDI primarily as providing service to our customers,” she says. “If there’s a problem, the time to restore service is much quicker for users, and security is always better. Staff resources also shift to the data center, which is a benefit because it allows us to more effectively tap into the intellectual capital employees and contractors bring from their education and experience. 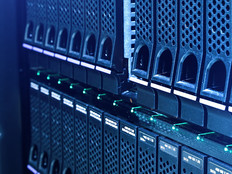