A primary care physician at SCL Health, a faith-based, nonprofit healthcare organization headquartered in Broomfield, Colo., may go home after a day at the office and need to address a patient referral. He or she can securely log on to a virtual desktop via a smartphone or tablet, thanks to Citrix virtualization technology, and complete the referral from the couch.

“So that ability to have continuity across the work environments, whatever the work environments are, has really been strong for us,” says SCL Health CIO Dave Pecoraro, speaking at the Citrix Synergy 2017 conference in Orlando, Fla. “They’ve really adopted it. And they like it.”

SCL Health, which won the 2017 Citrix Innovation Award at the conference, has 11 hospitals, 210 physician clinics, home health care, hospice, mental health care and safety-net services in three states: Colorado, Kansas and Montana. The company relies on Citrix’s virtual desktop infrastructure (VDI) and other cloud solutions for both its ease of use and its security, Pecoraro says.

At a time when doctors, nurses and clinicians are seeing more patients each day — and sometimes working for hours when they get home — any IT solution that can save them time and not add complexity is appreciated, according to Pecoraro.

SCL started as the Sisters of Charity of Leavenworth, who opened their first hospital in 1864. Pecoraro joined the organization in 2006 when it was called Exempla, then a three-hospital system based in Denver that was moving toward adoption of Epic’s electronic health record system. The Sisters of Charity, which has been working with Citrix for about 14 years, acquired Exempla in 2010 and the organization was renamed SCL Health, Pecoraro says.

SCL Health has been committed to using VDI and Citrix Workspace Suite. Using Citrix’s virtual application storefront model, SCL lets doctors, nurses and other staff members get virtual applications and run them on thin client desktops, which makes it easy for them to access the apps they need. Eventually, Pecoraro says, SCL would like to move to a Google Chromebook-like solution for even more security, so that the organization does not have to worry about encrypting hard drives or blocking USB ports. “User simplification and security have been driving factors for us,” he says.

SCL also uses XenMobile from Citrix to handle the bring-your-own-device trend, as well as other solutions such as XenWeb, XenMail and ShareFile. Its Citrix Workspace solution runs on VMware’s cloud infrastructure.

Because SCL has 14,000 employees, 6,000 contractors and others who are not direct employees (not all of whom SCL can directly manage), Pecoraro says the organization has had to deliver tools that are very “consumer-friendly” so that everyone will adopt them.

“There is such a drive in healthcare” toward consumerization, he says. “I heard this the other day: People expect your technology and your toolsets to work as if you went to Best Buy or something and then you take it out of the box and it just works. So that is a big aspect for us.”

The VDI technology allows doctors to easily access the apps they need at home, and Pecoraro says he credits David Brim, SCL’s director of enterprise systems and virtual architecture, with helping to drive deployment and adoption of the virtualization solutions. “It wasn’t my brainchild,” he says, “I don’t want you think the CIO thinks all this stuff up on his own, because I have very talented staff.”

Security Is Paramount in Healthcare Environments

The amount of investment that healthcare organizations need to make in cybersecurity probably exceeds the capital capacity of the industry. “We spend a lot of money now on things we never spent money on in healthcare before,” he says, noting that SCL is standing up a security operations center and investing in hardware and software.

The key is that SCL needs to rely on “strategic partners” like Citrix — the relationship is much more than just a vendor and a customer, Pecoraro says — to help manage its security. “We have to have a relationship that if we have a need or a concern, that they are there with us. That they’re not just there for a sale, or they’re not just there to do the technical support on a call basis, but really being a partner. They understand our needs.”

SCL plans to move to the Citrix Cloud for additional security in the next 12 to 18 months, Pecoraro says, in part because the organization can’t afford to build hyperscale data centers.

For now, Citrix’s XenMobile solution gives SCL easy-to-use mobile security to help manage a diverse mobile environment. “Our ability to give them an app, through SecureHub, that has the required security values in it, has been a great relief to me,” he says.

Fully 65 percent of SCL’s technology staff members are remote teleworkers and need access to SCL apps at home and on the road, Pecoraro says. “The ability for people to work anywhere, anytime, is really key to us now that our environment is changing,” he says. “And I think as we start to see more millennials in the workforce, that this just comes to be an expectation of, ‘I should be able to work at home the same way I work at the office, if I’m in a hotel or on the beach.’”

Doctors and other healthcare workers are constantly working to stay in compliance with regulations, and not just those related to the Health Insurance Portability and Accountability Act, Pecoraro says. “Anything you can do to make their lives simpler and faster, that’s greatly appreciated,” he says.

SCL’s workers also need to contend with multifactor authentication. “To them, this is a pain because you’re slowing me down, and you’ve already slowed me down with other things I have to do,” he adds. 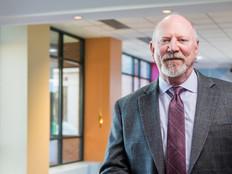