When Western University of Health Sciences opened its Virtual Reality Learning Center in 2015, it became the first school for aspiring medical professionals in the country to wrap a curriculum around VR technologies.

The center allows students to take virtual tours of the human body through cutting-edge devices like the Oculus Rift, says Robert Hasel, associate dean of simulation, immersion and digital learning at the Pomona, Calif., school. Multiple iPad devices also enhance the study of function and motion for students.

One year in, Hasel says he receives nearly nonstop email requests from other educators who look to follow in Western University’s footsteps.

“They want to know how VR changes the educational experience,” he says. “I just tell them to come see for themselves — and that, from my perspective, changes everything.”

Other institutions that have embraced such tools include Rush University Medical Center in Chicago, where obstetrics and gynecology residents can use VR to practice surgical procedures on digital patients; the University of Illinois at Chicago, where medical students use high-tech headsets to embody an elderly man with audio and visual deficits; and Case Western Reserve University School of Medicine in Cleveland, where anatomy, pharma­cology and other subjects are brought to life using mixed reality holograms seen through Microsoft’s HoloLens, a head-mounted unit that’s not tethered to a computer. 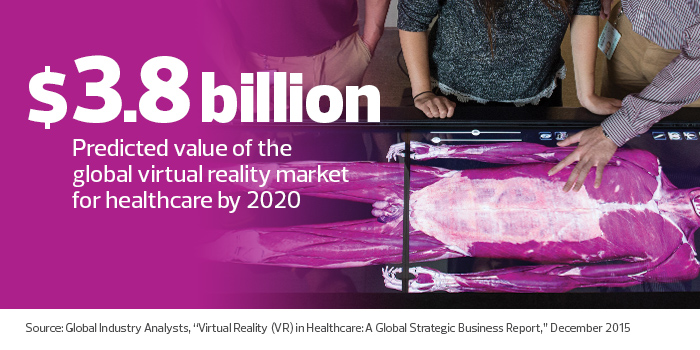 Once on, the device allows students to walk around the room and interact with digital information, such as a holographic human body, even as they interact with other people.

“The experience is like having X-ray vision,” says Mark Griswold, a professor of radiology at Case Western and director of a school pilot project exploring imaging technologies. “You can look through the skin and see the different organs, and you can cut through the image any way you want.”

By 2020, Global Industry Analysts predicts the global market for virtual reality in healthcare will be worth $3.8 billion. Medical training represents a key driver in the field.

Griswold believes it’s only a matter of time before such visualization systems replace human cadavers as the anatomical teaching tools of choice. When it comes to helping students understand and retain information, he says, it appears that such technologies provide a better, more efficient and faster way to learn.

“That should let them spend more time on other things like studying ethics or working with real patients,” Griswold says.

Hasel agrees but also offers a word of caution: The students in Western University’s VR center tend to enjoy the experience so much that when class comes to an end, they don’t want to stop. They’re often so actively engaged in the various stations — a favorite is the Anatomage Virtual Dissection Table — that the four-hour window they’re allotted for each session seems to pass in the blink of an eye.

“It can be hard to get them to leave,” Hasel says. “Sometimes you have to kick them out of the room.” 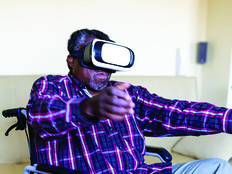